Over the past couple of years it’s become increasingly common to hear people confuse the words ‘premier’ – pronounced ‘premm-ee-er’ – and ‘premiere’ – pronounced ‘premm-ee-air’. The confusion usually arises when the speaker is referring to the top politician in each Australian state – the Premier – but instead calls him or her the Premiere. A premiere is in fact the first showing of a film, musical or other (usually) artistic event; a politician might have a premiere, but she is never one herself. 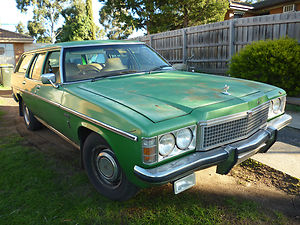 A Holden Premier. Not ours

There has certainly never been a car called the Holden Premiere, even though that’s a plausibly ridiculous name for a motor vehicle (how about Prelude, Charade, Escort, Magna, Megane, Cressida, Camry, Caprice, Festiva, Altice, Jazz, Kluger, Tiguan, Accent, Sunny, Accord, Golf, Probe – I could go on); no, that staple of 1970s Australian motoring was the Premier. If I remember correctly, it was a green Holden Premier station wagon that rolled backwards out of our Warrnambool driveway and down the Banyan St hill one winter night in 1975 or thereabouts. My pyjama-clad father pursued it, ripping his feet on the road, but ultimately could only watch as it flew across the Princes Highway and slammed into the petrol station on the other side. A bit of Premier-related history that is unlikely to be published anywhere else but here.