Posted on November 8, 2011 by Campbell Aitken 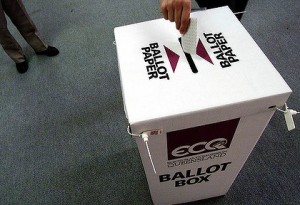 Australians are lucky to live in a largely functional democracy that allows almost all adult citizens to have a say in who governs us. What I find strange is that we are compelled to vote; after all, voting is about making a choice – it seems illogical that a democratic system should force its citizens to choose. (More accurately, what we do is compel people to give themselves the opportunity to make a choice, either in person at a polling booth or by postal vote.) Surely not voting is a perfectly valid choice – certainly as useful as a donkey vote or deliberately spoiling your ballot.

I actually like voting; it’s one of the few processes that makes you feel like part of the entire Australian (or Victorian, or whatever) community. Almost everyone gets out on the same day and we collectively make a decision about who should be in charge. I reckon that’s a great thing and it should be celebrated (despite the inevitable disappointment with the result). So, instead of making feel people like voting is some sort of weird quasi-triennal punishment, why not actually encourage people to vote, by (say) paying everyone who turns up to vote $20? Yes, it’d make elections even more expensive than they already are, but it’s taxpayers’ money after all, and it would provide a relatively greater incentive to lower-income voters who are traditionally less likely to vote (one of the major objections to removing compulsory voting). I reckon voter turnouts would be even higher than we get now and people would be more likely to see the point of their rights and duties as citizens.